Back in July, Holly was the winning female for The Southeast Qualifier for Joe Decker’s The Suck. This earned her a free ticket to The Ultimate Suck. Although she did not finish The Ultimate Suck, she nonetheless brought us back an excellent account of her experience.

It’s roughly 9:30 p.m. on August 30th and the black, moonless sky is lit up with millions of stars. I’m alone on a flat gravel road in the middle of Fulton County, Illinois , carrying a 35 pound bucket in each hand, along with “plenty of water”, heading nowhere fast for an unknown distance. When you are only 2.5 hours into a 36 hour event and already battling your head, you know it’s going to be a long night…and day…and night. “I must be the last one to start this event. Where is everyone else? Is this an out and back or a loop?

We were all familiar with the format at the Regional Suck events where a 1/4 mile bucket carry up a steep, rocky hill was easy 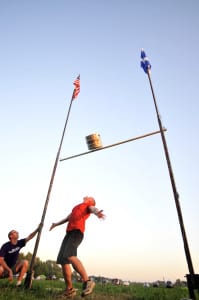 to wrap your head around. “Keep going until you get to the cone”, was a little harder to digest. It was my first 36 hour event and I had already blown out the ligaments on the bottom of my right foot in a freak rock impact on the initial “Three Mile” run. Ironic. I was hopeful, however, as I began to catch others on this bucket carry, even with my bum foot, and came to the turnaround in fourth place. I made it back to HQ for some one legged burpee frog hops across the cut straw field, and the first round of strong man events. But it was not meant to be and the decision to pull out set me up for a front row seat for the most inspiring event I’ve ever been part of.

The Ultimate Suck is pitched as, “Conan the Barbarian meets Full Metal Jacket with a dash of Deliverance mixed in for fun!” And that’s pretty much what it is. Earlier in the week, Joe Decker messaged me, “I just ordered the porto-johns, pizza and pepper spray.” Seriously? The mind reels…what’s he up to? Because you know he isn’t joking. But everything with Joe Decker, “The World’s Fittest Man,” according to Guinness World Records, has a purpose. He incorporates his knowledge of Exercise Science into his event design and understands how to push participants to their mental and physical edges…where all the fun begins. Two different Universities were on hand, excited at the rare, authentic opportunity to test the effects of sleep deprivation and physical exhaustion on the mental and physical effects over the course of 36 hours. Participants who volunteered as test subjects were checked at regular intervals for changes in blood pressure, body temperature, melatonin levels and hallucinations.

The first twelve hours of the event, from 7 p.m. on Friday to 7 a.m. Saturday morning, included a relentless series of tasks, that had the 15 remaining participants strung out across the rural farm where Joe Decker grew up. In the cool, dark of the night, they were introduced to the shooting range, wood pile, and a second farm that must mirror Joe’s twisted memory of his childhood–complete with chains to climb, hay to stack and a gas chamber for what else–burpees, of course! Maneuvering between locations was perhaps the worst part, as somehow the Decker’s are able to find hills where they don’t exist, and two of the nastiest ponds imaginable to gator crawl through on the way out and back.

As dawn broke, the real event began with temperatures quickly soaring into the triple digits just in time for the Crossfit Hero WOD Murph around hour 14 for most of the gang. It was an unforgettable version of Murph, however, starting of with a “Joe Mile.”*

*Joe Mile–affectionately named as such by anyone who has participated in a Gut Check event because you can always safely double it–because Joe has no use for GPS. “Does it really matter?”

The longest mile ever was followed by 100 rafter pull-ups, 200 bottom-up pushups and 300 air squats holding one of your sandbags. Competitors sought out small patches of shade that provided pitiful amounts of relief from the heat and spent a lot of time laying face down in between their pushups. They were not allowed to break up the reps as is often done with Murph.

What was to follow the second Joe mile was one of the most debilitating events of the entire Ultimate Suck, perhaps because it was such a simple task and yet so defeating. This second bucket carry of the event was an out and back for an estimated 3 miles. Do the math–that should take an hour tops if walking a snails pace of 20mph. Competitors left out with their 2, five gallon buckets with a 50# sandbag in each (30# for females), and what they assumed to be plenty of water. Heat index was over 105 and the gravel road was completely exposed to the sun. Already fatigued and dehydrated, competitors took their requisite 10, 20, or 30 paces then dove for shade–or simply sat on their buckets in the middle of the road. Heat exhaustion began to set in for some. Looking out for each other, a handful were forced to leave their buckets on the side of the road in order to return to headquarters for water resupply–nobody expected to be gone that long. This turned into a 4.5 hour bucket carry for some…the lucky ones a few events back started their event as the sun was setting. 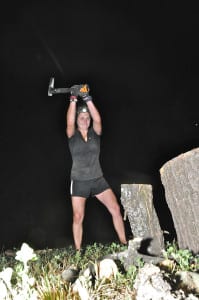 The middle twelve hours of the Ultimate Suck served to separate the field into front-runners and those who sought to make it to the end–a feat in itself. As the sun set, energy was renewed and the Beasts began to regain their strength. Tasks started to look like Groundhog’s Day with a repeat of many of the events from earlier that you were happy to have finished the first time–the second time around was like a cruel joke with the added stress of sleep debt, effects of the hours in the heat and the fact that you can’t believe you are undoing work you worked so hard to complete in the first place. Tasks that were manageable the first time–chopping wood, climbing chains, moving hay bails–became an exercise in frustration and pure determination with punitive rewards for failure to execute.

With four hours to go, the remaining 14 competitors were gathered together for their final event–One last bucket carry to Polecat Road and back. Nicole Decker kicked the event off with a goose-bump rendering National Anthem that rang out across the quiet of the morning. Once again, four hours to walk a few miles seemed ridiculous, but the hands attempting to grip the buckets knew that this was going to be a daunting task.

I will never forget the heart demonstrated by these individuals, who just had their asses handed to them, willingly, for 32 hours, and their ability to accept the task and break it down into manageable bites. That’s what you learn from an event like the Ultimate Suck–the opportunity to see how you perform in the face of the unknown–to dissect a basic task and figure out how to get it done when you are tired, irritated and fatigued. And so they did–some at 10 steps at time. 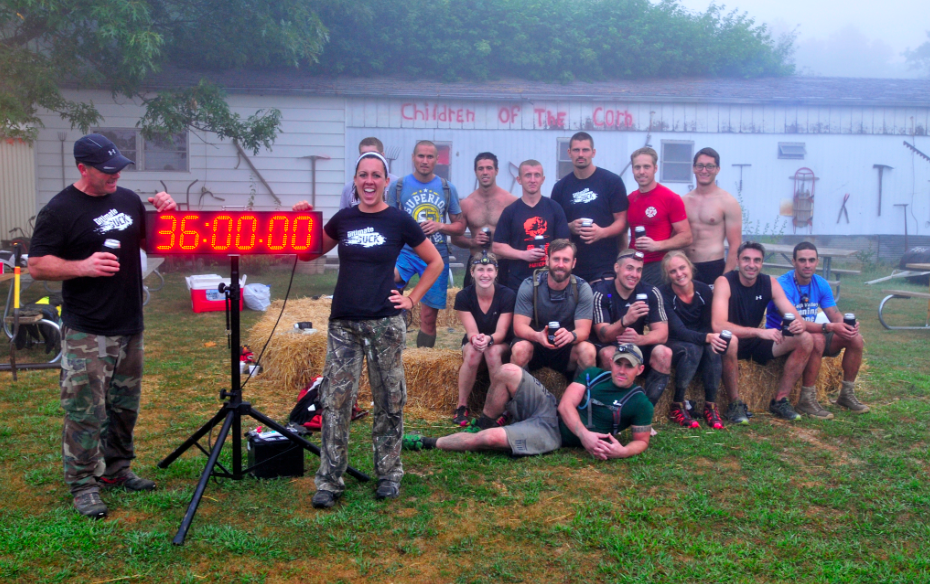 Twelve men and two woman made it back to HQ under the 36 hour mark then loaded some more hay bales at the farm–in actual work that Joe’s dad needed done. Covered in duck weed, mud, sweat, poison ivy, and hay dust, a bond was formed. Despite their overwhelming fatigue, I suspect all will return next year with friends in tow to push the limits again. Half of us are already signed up. Join us?

Holly is a personal trainer and coach, living in Greenville S.C.  She believes in turning time to her favor since we must move forward in order to accomplish new goals.  Check out more from Holly and her team at Stoicrunner.com.